Energia Group is set to power the first ever hydrogen-powered double decker buses in Ireland before the end of 2020 in the first major step to de-carbonise Northern Ireland’s public transport to zero emissions by 2040. 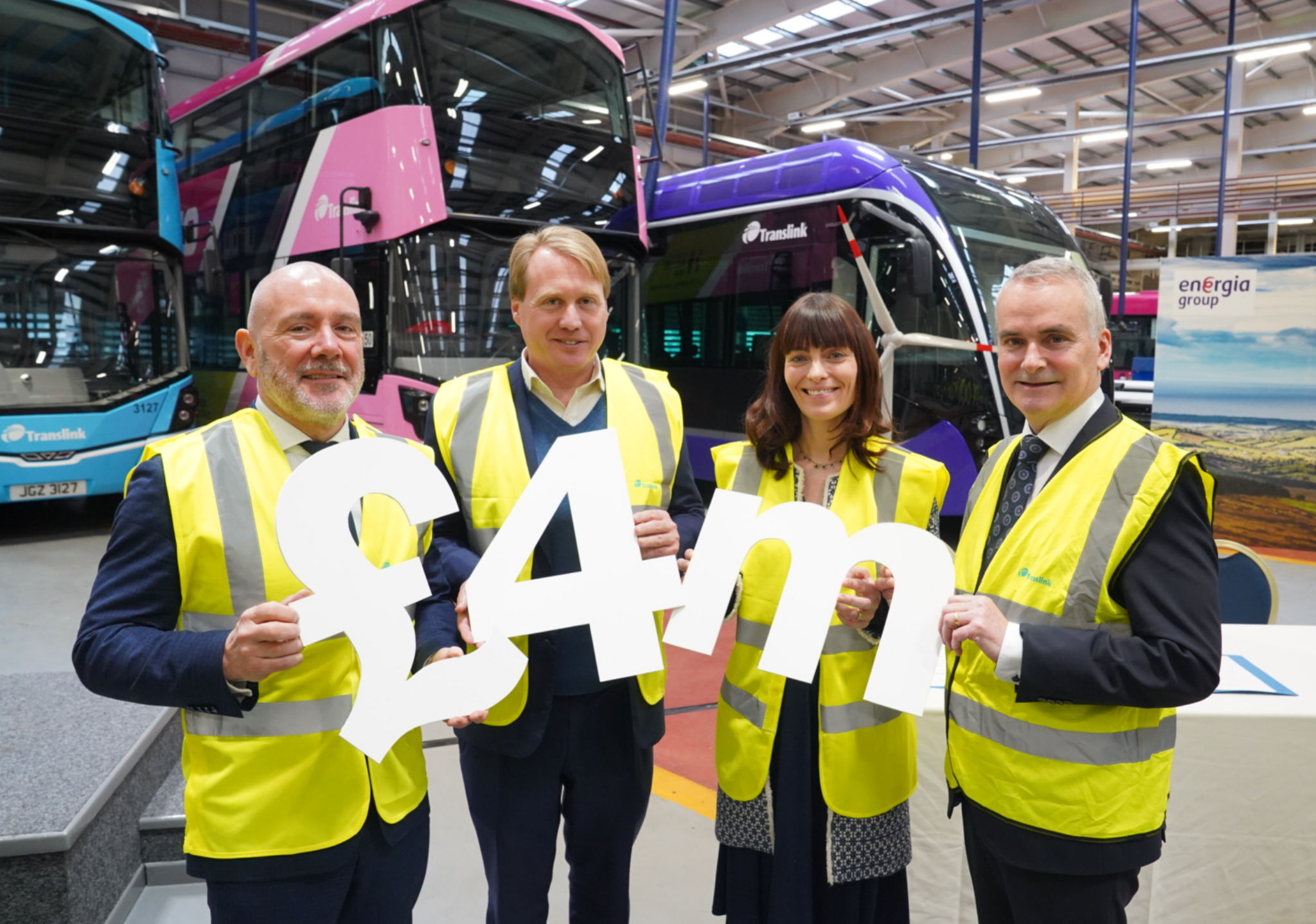 The announcement was made today, (Wednesday 29th January 2020), by Energia Group, Translink, and Wrightbus with support from the Department for Infrastructure and the Office for Low Emission Vehicles (OLEV), marking an innovative partnership between the private and public sectors to combat climate change and improve air quality – recognised as the greatest environmental health risk in the UK.

Energia Group has signed a contract with Translink to supply renewably-sourced hydrogen fuel from an on-shore North Antrim windfarm. Wrightbus has also signed with Translink to supply three new sustainable fuel cell electric double-decker buses powered by hydrogen. The overall capital investment represents around £4 million. The pilot project will also deliver the first ever Hydrogen refuelling station of its kind in Ireland.

Speaking at the contract signing in Translink’s Milewater Service Centre, North Belfast, Energia Group Chief Executive Ian Thom said: “Energia Group is the first energy company on the island of Ireland to have a long-term hydrogen supply contract with a public transport company.  Working with our subsidiary in Northern Ireland, Power NI, we are developing a number of solutions which will help facilitate the transition of all segments of the transport sector to help meet climate change and air quality standards. This work is an important part of our commitment as a green energy supplier and we are proud to be a key enabler in the decarbonisation of the public transport sector in Northern Ireland.

“We are delighted to partner with Translink on this renewable hydrogen project which brings together both public and private sector investment and innovation. The project will also be an important enabler for the development of the skills and capabilities of local companies, such as Wrightbus, so that export opportunities in the global hydrogen economy can be realised.” 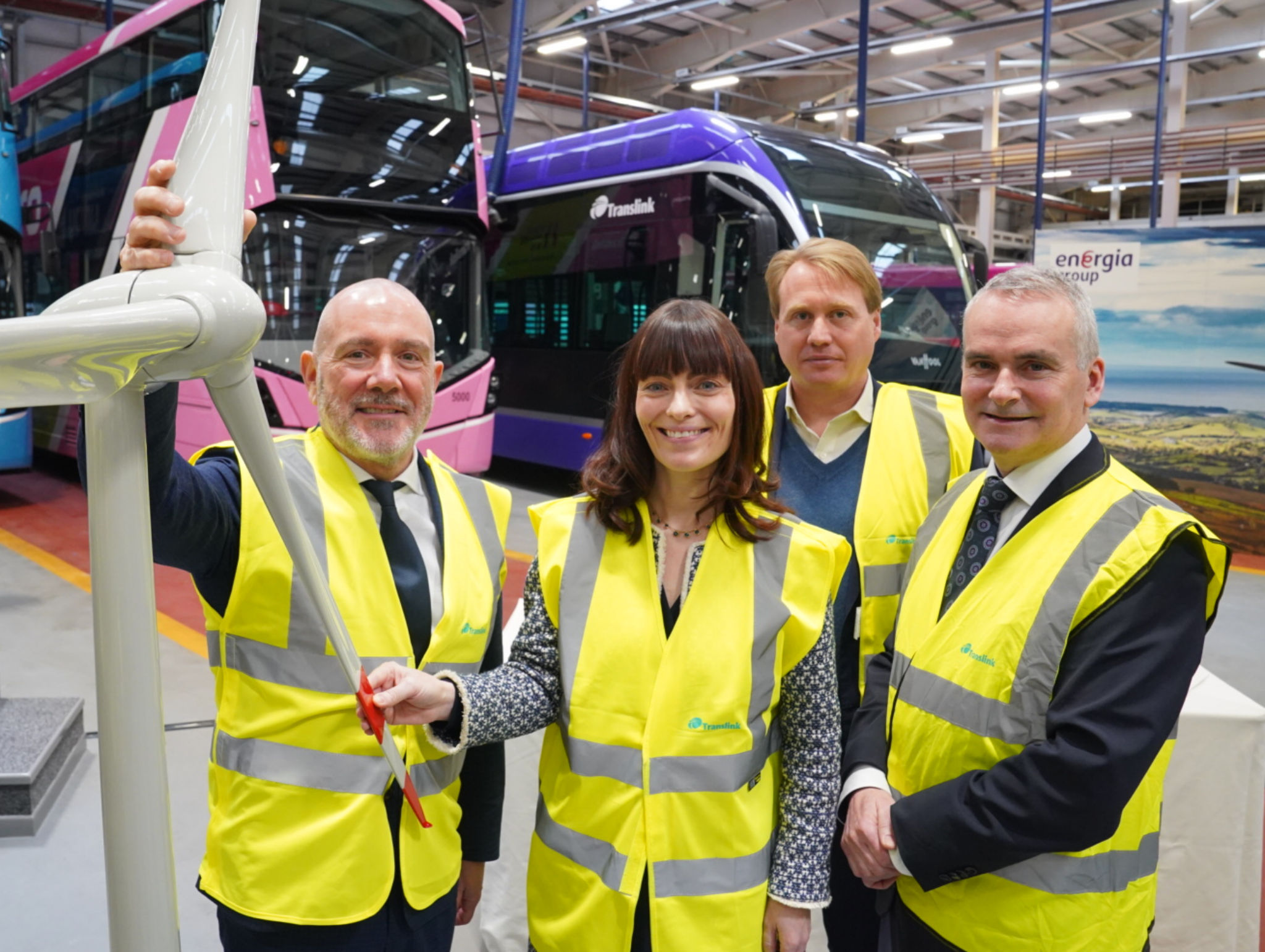 Minister for Infrastructure Nichola Mallon said: “My role as Infrastructure Minister is to transform people’s lives, better connect communities across the island, ensure we have a thriving balanced economy and play our part in tackling the climate emergency. We cannot do that without changing how we as individuals travel and in government focusing on a low carbon future where we make low emission public transport accessible to people and communities across Northern Ireland.”

“Along with other Executive Colleagues, I have a responsibility to this generation of young people and the next generation who will live with the consequences of the climate crisis. That means taking action now, being ambitious despite the challenges we face and working together across the government and private sector to drive the innovative solutions that will be needed. That is exactly what this exciting pilot does. It represents a significant first step to tackling the climate emergency we face and demonstrates how working together and as individuals we can play our part in delivering the ambitions of the Northern Ireland Executive to reduce greenhouse gas emissions and improve air quality.”

Translink Group Chief Executive Chris Conway said: “Today’s announcement marks a major milestone in our efforts to transform public transport and reflects our climate commitment to reduce carbon emissions. This innovative collaboration will not only reduce carbon emissions but will also generate much wider environmental, economic and social benefits for Northern Ireland.

“The time for action is now and, with a record 84.5m passenger journeys on Translink services last year, making public transport your first choice for travel is the single greatest way to reduce your personal carbon footprint and one of the most immediate.

“We would like to thank OLEV and the Department for Infrastructure for essential project funding and look forward to working with Energia Group and local manufacturer Wrightbus to deliver this new era for public transport in Northern Ireland.”

Wrightbus Chairman Jo Bamford said: “As Wrightbus embark on an exciting new era to revolutionise public transport we are delighted to be able to partner Translink with these fantastic world leading Fuel Cell Electric Vehicles. This order helps further cement and develop our valued relationship and further proves that Northern Ireland can be at the front of the world stage when pioneering solutions which deliver zero emissions in our towns and cities throughout the UK and Ireland and the rest of the world whilst helping our local environment and economy.”