Fun and interesting insights to wind energy from how it works and to why it's a key renewable source in Ireland. 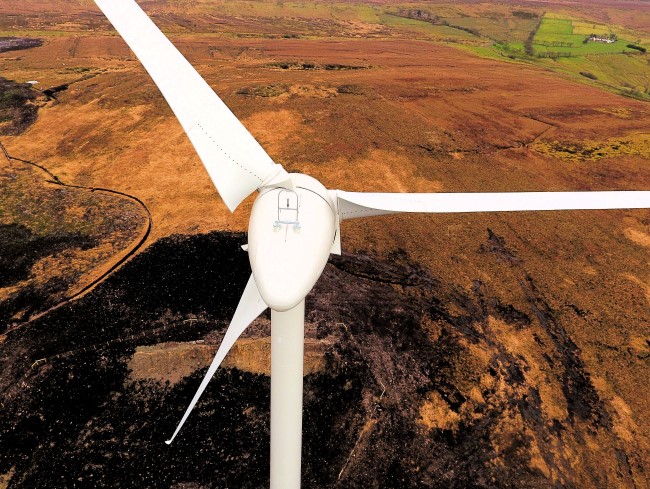 Wind energy is already undeniably a powerful and successful source of renewable energy in Ireland with an important future ahead as sustainability becomes top priority for homes and businesses across the country and the target net zero position of Ireland’s Climate Action plan, edges ever closer. In this quick read we explore top 10 facts about wind energy in Ireland, which is propelling us towards a cleaner, greener renewable energy model.

1. Ireland’s windfarms can generate enough electricity to power every home

Wind energy is one of the fastest-growing renewable energy sources in the world due to its natural abundance and ability to generate electricity on a large scale. The Energia Group is proud to have 15 operational wind farms across the island of Ireland which generate over 300MW of renewable electricity. You can see an overiew of our projects here.

Ireland has an advantageous geographical position that makes it suitably windy. This is mostly thanks to the surrounding Atlantic Ocean and subsequent pressure systems it largely drives. Wind is created by a combination of the earth’s rotation and by air temperature differences caused by the uneven heating of water and land by the sun. The sun heats land quicker than water, warm air rises and takes the place of the colder air – it is this movement of warm and cold air that causes the wind to blow. As an Island nation, Ireland’s winds are frequent and powerful, with the added advantage of an economic region extending into the Atlantic Ocean and Irish Sea making offshore windfarms a highly successful option to renewable generation. Onshore wind farms benefit from Ireland’s mountainous landscape which are important locations to take advantage of high wind speeds and reduce any potential slowing caused by obstructions such as trees and buildings.

3. Turbine blades turn in the wind and it’s this exact motion that is needed to generate electricity

Wind turbines in both commercial wind farms and smaller microgeneration locations harness the force of the wind to move the turbine blades, which begin to rotate around a rotor. As the blades spin, they create kinetic energy which travels down the nacelle of the turbine where a generator then converts the kinetic energy into electrical energy or electricity that is then supplied to the grid and used to power homes and businesses across Ireland.

4. Wind energy is greener, cleaner and sustainable for the future

Wind energy has a limitless natural supply, it does not require any fossil fuels and it also does not release any carbon emissions making it both a renewable, sustainable and an environmentally friendly source of energy. As we move towards increased utilisation of renewable energy in Ireland, a reduction in carbon emissions is improving our air quality and offsetting the effects of global warming. In order to deliver on ambitious carbon
reduction targets set out in Ireland’s Climate Action plan, there is a requirement to increase the generation of energy from wind farms.

5. Wind energy is the largest renewable energy resource in Ireland

According to the Sustainable Energy Authority Ireland (SEAI) most recent figures indicate that approximately 42% of all electricity produced in Ireland is from renewable sources while 86% of this renewable electricity came from wind. The Energia Group currently supplies 21% of renewable energy in Ireland and is continuing to invest in the development of further wind energy, solar technology, hydrogen production, bioenergy and battery storage projects.

The standard life span of a modern, large, commercial wind turbine is between 20-30 years. These turbines require regular maintenance (much like your home or car) to be efficient and ensure their productivity and outputs are continually optimised. Turbines can ironically be affected by the environmental conditions they face such as the wind and although designed specifically to handle certain consistent high wind speeds, these robust and impressively engineered structures require careful monitoring to deliver maximum efficiency. At the Energia Group we have exciting career opportunities at our wind farm sites and across our renewable projects. Check out the latest jobs online now.

The first-ever wind farm project in Ireland was completed in 1992 at Bellacorrick, County Mayo. Now, there are almost 400 wind farms on the island of Ireland!

The largest wind turbine in the world is an offshore hybrid drive wind turbine in China. Its diameter is 242 metres long, its blades are 118 metres long. Ireland's wind turbines range from small microgeneration at 4m long up to 50 metres at commercial sites. The 50-metre blades can power up to 1,100 homes.

10. Investment in wind energy is big in Ireland

The Energia Group have launched a ‘Positive Energy’ Programme, which will invest over €3 Billion in Irish renewable energy generation and related systems over the next 5 years. This will create over 200 new jobs directly across the Energia Group in areas such as customer energy solutions and renewable technology, and an estimated 3,000 to 5,000 construction jobs over the duration of the programme.